“The Matrix is a system, Neo. That system is our enemy. But when you’re inside, you look around, what do you see? … The very minds of the people we are trying to save. But until we do, these people are still a part of that system and that makes them our enemy. You have to understand, most of these people are not ready to be unplugged. And many of them are so inured, so hopelessly dependent on the system, that they will fight to protect it.”

Hip Hop is dead. Its been dead. In fact its been dead for a long time, the problem is that we are just now starting to realize it. Hip Hop, or the matrix we know to be hip hop, has long been pronounced dead, been buried and mourned by those who truly knew her. What we are witnessing now is its decay…its decomposition, as its body, its dead flesh slowly rots and returns to the earth. The bacteria that was feeding off of hip hop when it was still fighting for its life has now begun to digest the internal organs of the body after its death. The flies have begun to lay their eggs and the maggots hatched from them are now eating away at the remainder of the body while the odor is deathly unbearable. Sorry but Nas’ diagnosis on the current state of hip hop is about two decades belated…and too little too late. Hip hop, in its most present form, was ritualistically murdered from the moment it was named, because once you name something, it is locked into a box and looses its power. Once this particular art form was named, labeled, and formatted for commercial use by the machines, it had forever lost its power and meaning, was crucified in sacrificial fashion, offered up to the material machine gods who rule this world, and distributed to the masses. The machines have taken over…Zion is no more.

Those whose minds are still locked into and controlled by the matrix have since failed to recognize the fact that hip hop, as a music, was killed the very instant that corporations began to control it. The minute that the corrupted profit driven global corporate entities monopolized the creation, production, manufacturing, and distribution of hip hop, the machines had breached the walls. The hip hop holy land, our Eden, was destroyed and replaced with something else. Something else that was not art…but artificial. Its promise of quality has now been replaced with quantity. The spirituality that it once possessed has been substituted with substance-less materialism. Its natural acoustic instrumentation, its jazz roots, its innovative re-sampling of the past in order to create something new and fresh has been drowned out. Today’s hip hop is the repetitious and redundant noise of artificial synthesizers and meaningless mind numbing chants. The spiritual element of hip hop has since been re-presented in physical form as hip pop, as our collective consciousness has moved from the streets and the struggle to the club and the clinic.

What we, today, recognize as hip hop is no more than a mere shell of what it used to be and what it has been replaced with is something far more sinister…far more evil and digressing to the minds our youth, far more mis-educating than what any negro has previously experienced, and yet…it is being forced down our throats more than ever before. As artists and industry insiders we play an important role in all of this because in our eagerness and willingness to engage ourselves in this game, as we plug ourselves into it, we do nothing but become mere agents of the matrix as we fight to protect it by further its goals. Our ignorance and arrogance act as sunshades blocking out the light of reality. Our greed, our hustling ambitions, our dreams to be successful…to get out of our current situations act as the fodder and fuel to drive us in our acknowledgment, and therefore encouragement, of this present day matrix that we think is real. Every step we take in preserving its present form, is a step towards finalizing the death of the art, and preventing its reincarnation into something better, something more spiritual…something more uplifting and inspiring. We are killing the phoenix before she has a chance to rise from the ashes. But we have seen this before.

As previously stated, this hip hop is just one matrix of many, there were others before it, the one that we are witnessing now is just the most powerful version of it, as it has transcendent all races and color lines, all nations and languages, and has encompassed all different genres of music into itself seamlessly. The last matrix we experienced that was close to this was rock music, which started as black music but later succumbed to occultism and satanic influences. It is important to understand that this current version called Hip Hop, as a music, was born on Cedric Ave. in the Bronx in New York City, but as an art form, has existed for ages since the beginning of our creation with the original man. The Art form, now being exploited through this matrix we call hip hop, is simply the art of taking things from the spirit world, or realm, and bringing in into physical manifestation in our physical world via our creativity and accessing of the oracle. Us artists are just the conduits. We create something from nothing. But because this matrix has us vibrating at such a low frequency, all we produce is materialism, where as the higher frequencies illuminate consciousness and spirituality. This art is nothing more than modern day alchemy, hip hop is just the name used to keep it, and therefore us, in a box so that we are not further initiated into the knowledge and true power in which we possess. We are the architects but they are the beneficiaries.

So the question arises…how did we become slaves to something that we created? When did we become servants to a system we built? Well, look at the United States. America was original designed as a government with checks and balances and designed to protect its people from tyranny, including those who would try in infiltrate it from inside through political power moves and maneuvering. The founding fathers of this nation drafted the constitution knowing that the government was only a shell, and the republic could easily fall if its people not constantly vigilant. Today, hundreds of years later we have the United States Corporation, a privately owned corporation in the form of a hijacked corrupted government that uses fear to control it citizens, when instead it should be controlled by its people. It is almost the exact same story with hip hop, as our negligence, our dodging of responsibility, our failure to uphold our hip hop constitution has led to fall of our great republic, only to be controlled and terrorized by it. We work for it, instead of against it, and it had infiltrated every single faucet of our everyday lives, our households, families, our children, and yes…our minds. We are wards of the state of hip hop…we are slaves to pages in our rhyme books.

By Amadeuz the Christ Child 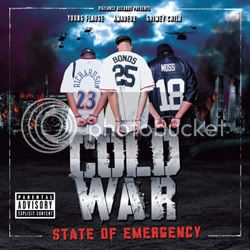